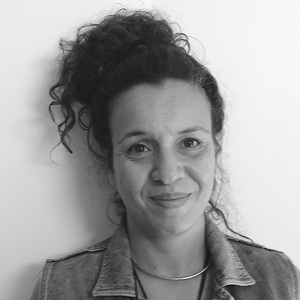 After more than 15 years as a cultural journalist, Maria Daïf branched out to cultural mediation, accompanying independent cultural projects in music, cinema, publishing, dance, and visual arts taking over project drafting, press relations, and consulting. She was part of the selection committee of the Young Arab Theater Fund and of Art Moves Africa.

Between 2012 and 2013, she directed the publication: L’Batwar. The old abattoirs of Casablanca, story of a reconversion. In 2013, she founded Illi magazine and became a radio host with a special feature on Radio 2M. From 2015 to 2018, she was the Head of the Touria and Abdelaziz Tazi Foundation for the promotion and support of culture and ran the structuration of her cultural space, l’Uzine in Casablanca, which became a staple cultural organization of Morocco for artists and the public alike.

She is currently a freelance consultant in art and culture and has worked with artists as well as young and more seasoned organizations towards their development and structuration. Her cultural activism has one main driver: her belief that access to culture is a human right.