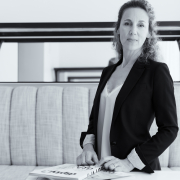 Meryem Sebti is a Moroccan journalist, co-founder, publishing director and editor-in-chief of the contemporary art magazine Diptyk. She began her career as a journalist at La Vie Eco and Le Journal hebdomadaire magazine. After having created a firm of editorial content for companies and produced the magazines of many Moroccan companies, she turned to the art press. In 2008, she moved to Casablanca and began working on the project of an art magazine with Yasmina Bouzid, independent curator. The first French-speaking magazine dedicated to contemporary art from the Arab world and Africa, the first issue of Diptyk came out in June 2009.