Théâtralité d’une vie, Hossein Tallal et les artistes de la galerie Alif Ba (Theatricality of a Life, Hossein Tallal and the Artists of the Alif Ba Gallery) is a tribute exhibition to the artist open to the public from 4 November 2022 to 20 July 2023.

Dedicated to one of the most outstanding Moroccan painters of his generation, this exhibition retraces his artistic career through key works, but also highlights the man, the character, a true personality of the Casablanca and Moroccan cultural scene since the early 1970s. 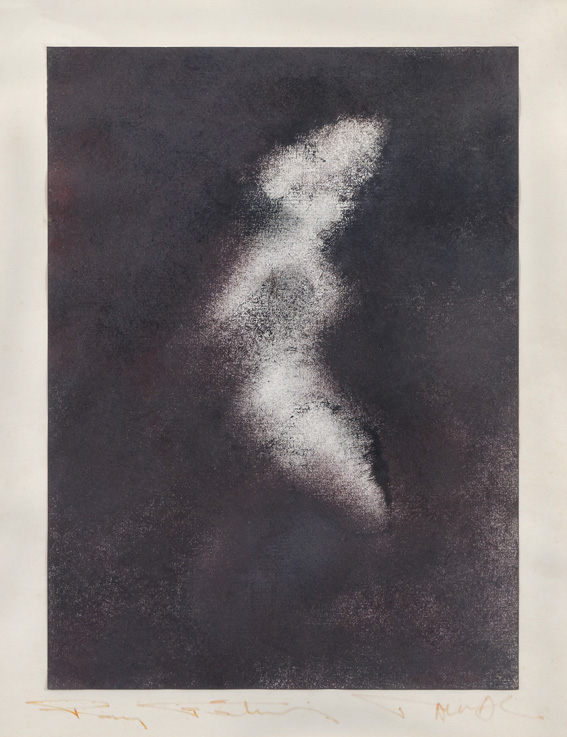 Tallal was an extraordinary artist whose free figurative works stood out in the modern Moroccan pictorial landscape; free in line and gesture, but also in his subjects, mostly portraits straight from his imagination. Tallal endeavoured to represent a world to which he is the only one who has the key and from which remanent figures emerged: the circus character, the troubadour, the acrobat. These fanciful representations have crossed the years and populated his work in a myriad of variations like an obsession, that of a tireless painter seeking, in the words of Alain Flamand, “the right work”.

This pictorial research is in line with Tallal’s collecting. His Casablanca studio, a true cabinet of curiosities, was overflowing with objects of all kinds. That of the gallery owner too. Opened in 1982 with his mother Chaïbia, the Alif Ba gallery was a high point of the Casablanca artistic and cultural scene at the end of the 20th century in which were exhibited the great figures of modern Moroccan art, such as Malika Agueznay, Farid Belkahia, André Elbaz, Mohamed Hamidi, Mohamed Kacimi, Hassani and Mohamed Melehi. 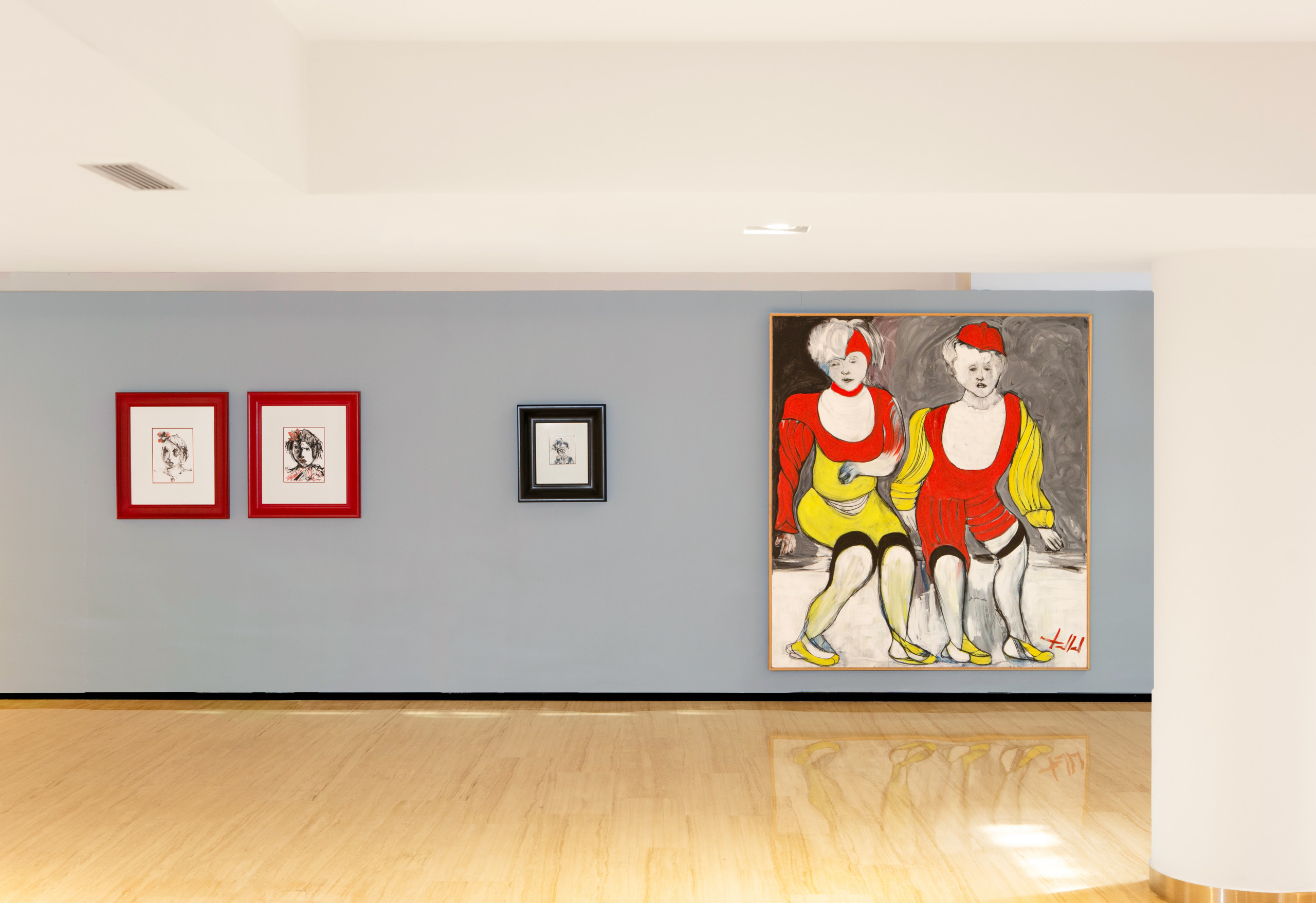 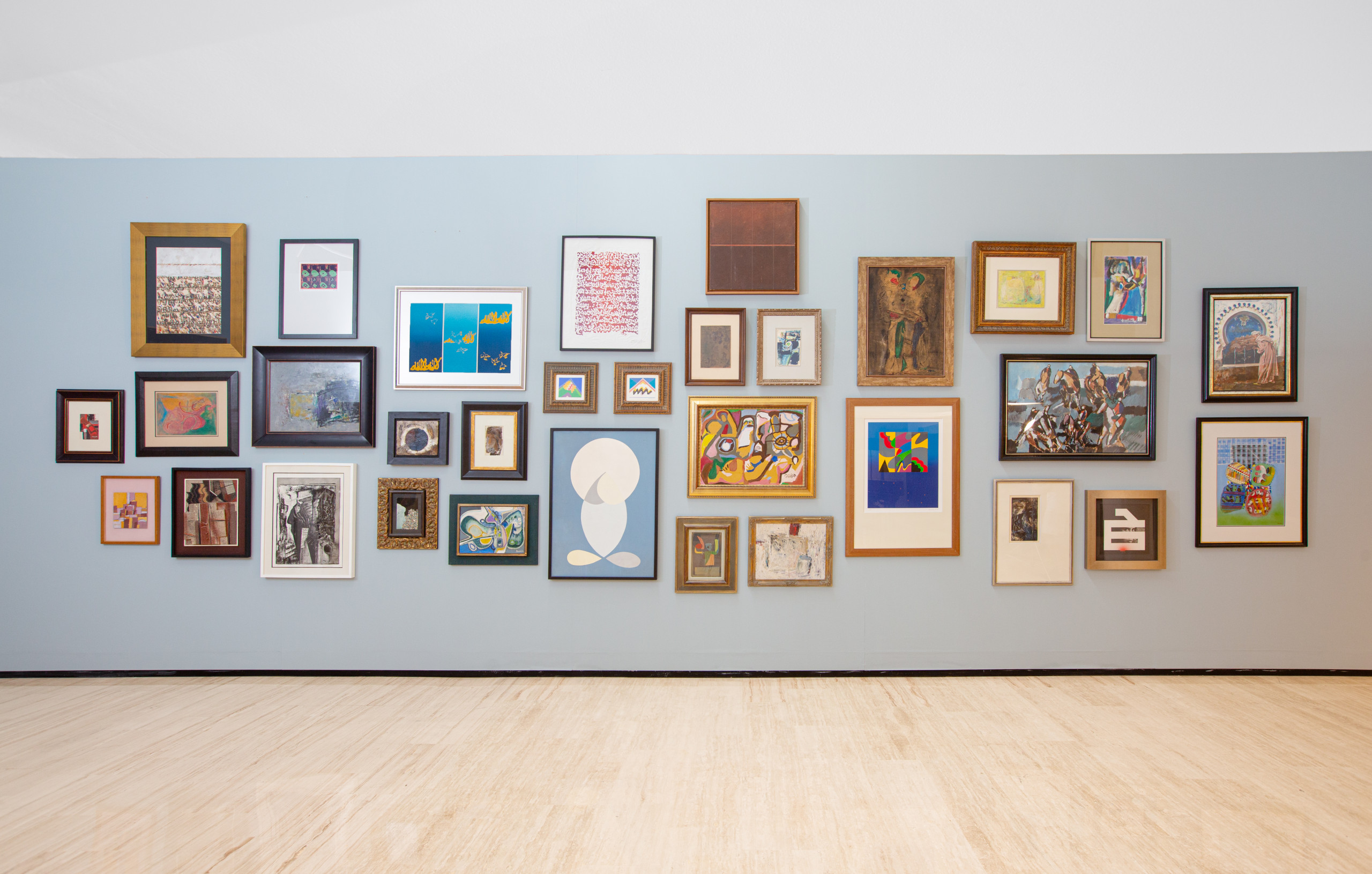 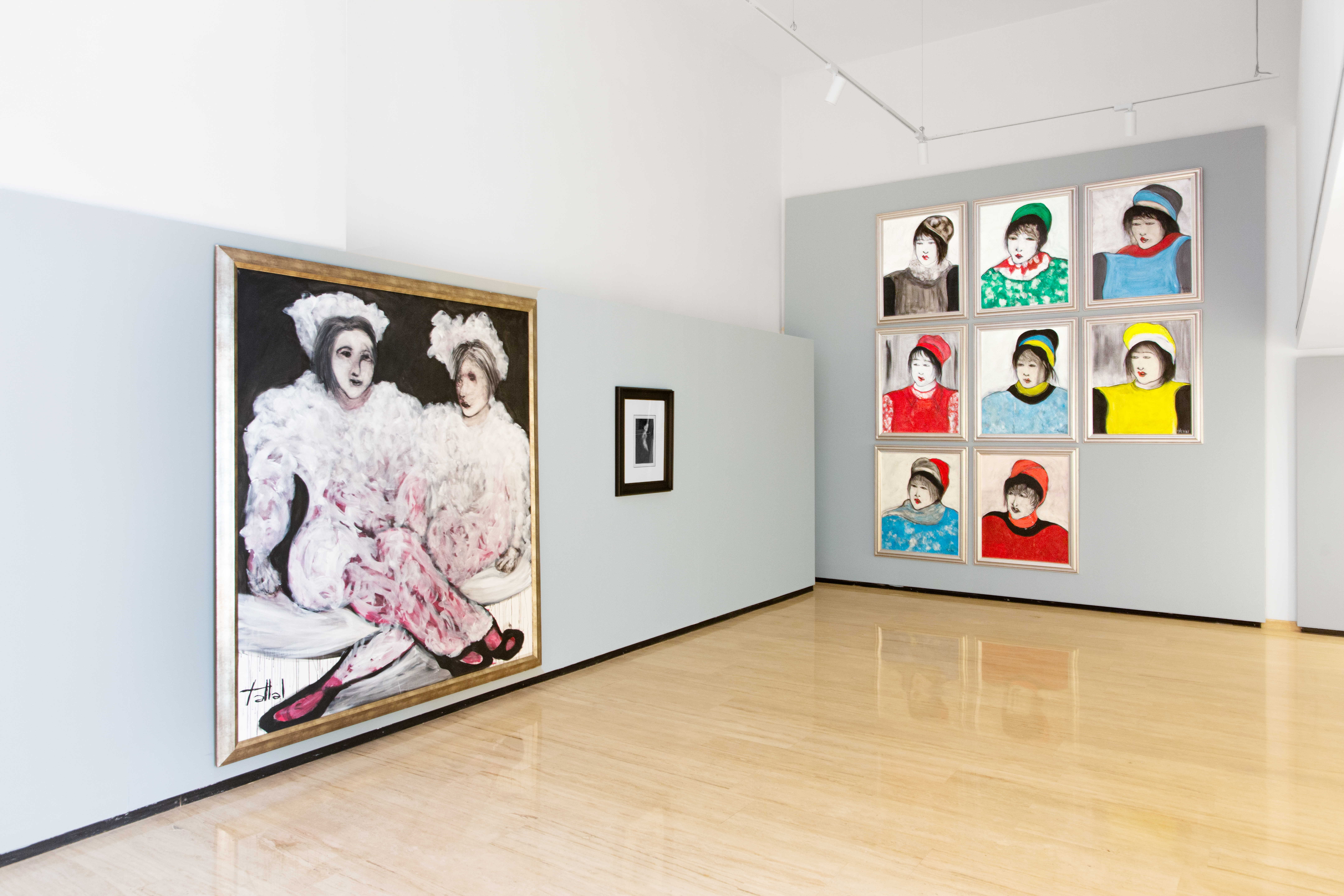 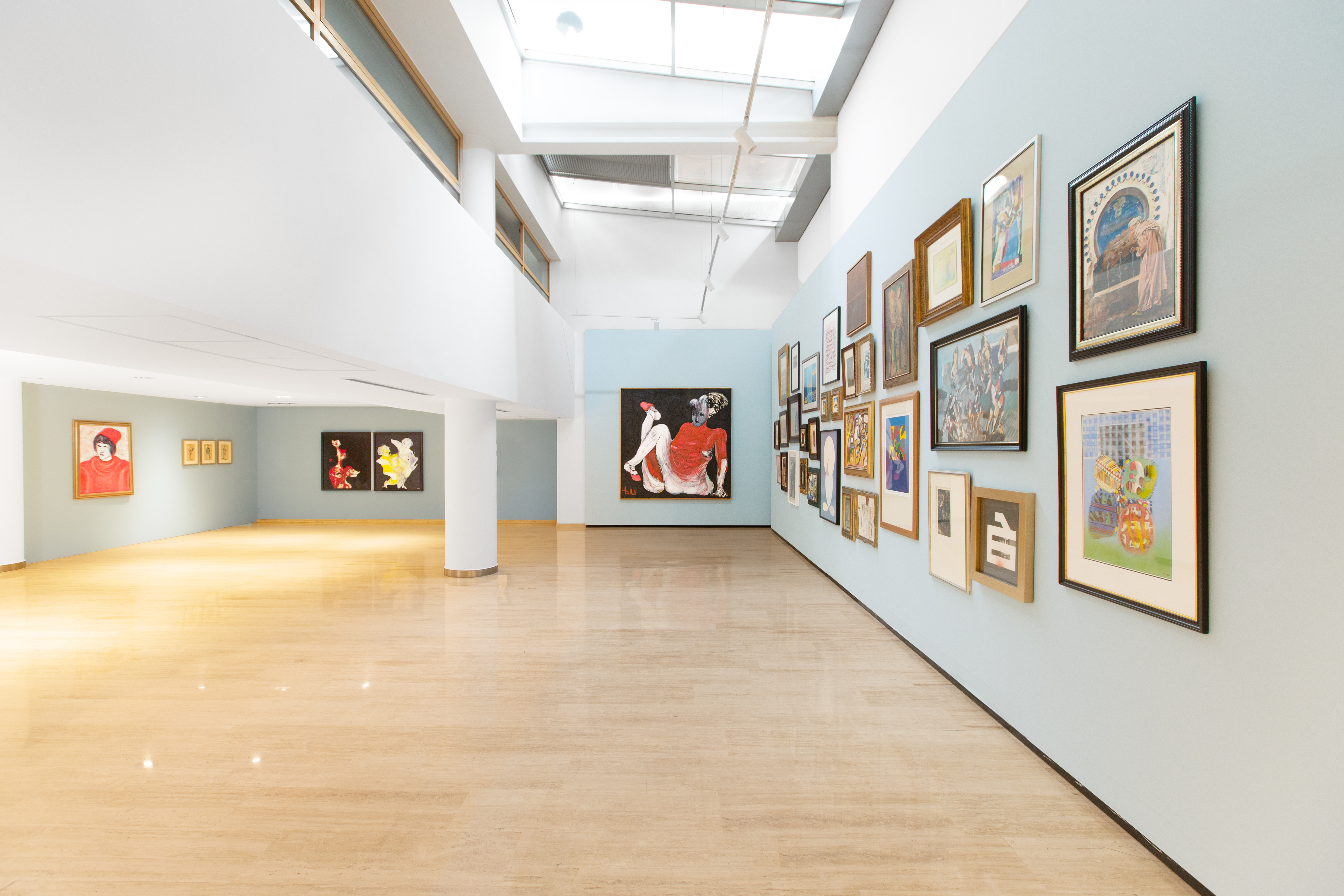 A colourful character, Hossein Tallal left a lasting impression on the Casablanca art scene. Gathering works, archives, documents and testimonies in a scenography reproducing the sensitive and subtle atmospheres of his living places, Theatricality of a Life is a dive into the universe of this singular artist.

Hossein Tallal was born in 1942 in Casablanca. He has only vague memories of his childhood, except for the indelible memory of a circus show which inevitably marked his artistic practice. The son of a young widow with no resources, Hossein lived the first years of his life in great precariousness. Despite this difficult context, his artistic vocation became apparent very early on. He began drawing using the tracing paper and coloured pencils that his mother, a housekeeper, used to bring him from her employers, and practised self-taught painting in parallel with his training in ironwork at the Professional School of Casablanca. At the end of the fifties, Tallal befriended Ahmed Cherkaoui, who encouraged him in 1965 to participate in the Marrakech Winter Exhibition, which brought together a hundred Moroccan and foreign artists. He won first prize and was awarded the medal of the French Academic Society “Arts – Sciences – Letters”. In 1967, his first individual exhibition was held at the Parisian gallery La Roue. He then participated in numerous international exhibitions, notably in Spain, Denmark, the United States and Egypt, and joined the very closed circle of Parisian art collectors and critics. When he met the writer and critic Pierre Gaudibert, who discovered the talent of his mother Chaïbia, he devoted himself to managing Chaïbia’s artistic career to the detriment of his own, producing very little. In the 1970s, he moved to Casablanca to a loft near the Ohana Square, where he piled up all sorts of old objects. We then discovered the Tallal collector of antiques and rare objects but also the host who regularly received guests.
At the artist’s home, we meet Tayeb Saddiki, Farid Belkahia, Saâd Hassani, Francis Blanche and Jean-Claude Brialy. In 1982, he founded the Alif Ba gallery in Casablanca with Chaïbia, where he exhibited with Mohamed Hamidi, Mohamed Melehi, André Elbaz, Mohamed Kacimi, Saad Ben Cheffaj and other renowned Moroccan artists. In December 2003, Tallal presented his Artistes voyageurs de nuit – portraits evoking the circus world – at the Fondouk Bachkou, the studio of his friend Saâd Hassani in Casablanca, and thus marked his great return to the Moroccan art scene. Tallal’s works have been included in prestigious collections including Attijariwafa Bank, the AL MADA Foundation, Société Générale, Akwa Group, Maroc Télécom and the Fondation Alliances.

The artist died on 19 February 2022 in Casablanca.